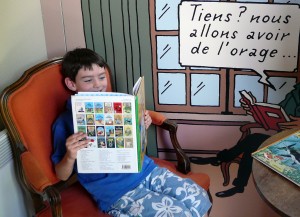 In Belgium, dog-eared copies of young journalist Tintin and his faithful dog Snowy’s world adventures litter the bedrooms of kids of all ages.  Since I was born in Belgium and lived there until age nine, I consider Tintin to be a major part of my cultural heritage and introduced my own boys to him at a very young age.

So blame it on a genetic predisposition or just plain exposure, but my two oldest boys, Jacques and Julian, who were born and raised in the U.S., are pretty much obsessed with the Belgian comic book hero.  In second grade, my oldest son Julian had to make a life-size cutout reflecting his cultural heritage.  Two years later, the four-foot tall image of Tintin still hangs on his bedroom wall.  Last year, eight-year old Jacques dressed up like Tintin for Halloween, trench coat, hairstyle and all. 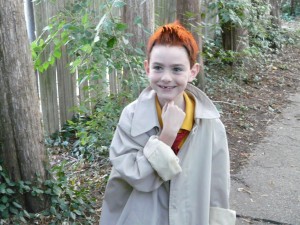 First published in 1937, Tintin’s globetrotting adventures and madcap band of sidekicks still capture the imagination of young boys from Brussels to Hollywood.  For me, just the feel and smell of my old comic books fill me with nostalgia and bring back the wanderlust I felt while reading them in my bedroom in La Roche, the small Wallonian town where I grew up.

Last summer, on a family trip to Belgium, the boys got the chance to tread on the hallowed land of their red-haired idol and learn about his creator, Hergé.

Hergé was born in Brussels in 1907 as Georges Rémi.  At the age of seventeen, he was already publishing his own comic strip drawings, signed under the pseudonym Hergé – RG, the French pronunciation of his initials reversed. In 1928, he founded his own comic strip magazine, Le Petit Vingtième, where Tintin and Snowy first appeared a year later.

Living through the greater part of the Twentieth Century, Hergé saw a tumultuous time in Belgium’s history, including two World Wars and colonialism.  This is reflected in his early books, which are laden with political messages.  In contrast, his later books, such as “The Temple of the Sun,” are pure adventure, providing an escape from the realities of daily life in occupied Belgium during World War II.

Interestingly, Hergé very rarely left Belgium and certainly never ventured to most of the exotic lands he wrote about.  He was the consummate armchair traveler.  Most of his research was done in magazines, newspapers and the Cinquantenaire Museum, one of his favorite places in Brussels.

The Land of Tintin

Unlike the broad vistas depicted in Hergé’s books (such as the American West, the Amazon and Tibet), Belgium is compact, neat, and incredibly cozy.  With the smell of street waffles wafting through medieval squares and unique art nouveau architecture, it’s not hard to see why Hergé seldom left the streets of Brussels.  Brussels is an easy city to navigate with kids and it offers plenty to do for the Tintin pilgrim.

Step Into a Comic Book: For a country the size of New Jersey, Belgium has produced a tremendous amount of comic books, from Tintin, the Smurfs, and Le Chat, to lesser known figures such as Cubitis.  Brussels offers a fantastic walking tour that showcases this native artform by taking you through various neighborhoods with over thirty open-air comic book murals painted on the sides of building.  Children love navigating the map and make a game out of being the first to spot the murals.  Click here for a printable walking map: http://visitbrussels.be/bitc/BE_en/walk/344/brussels-and-comic-strip.do 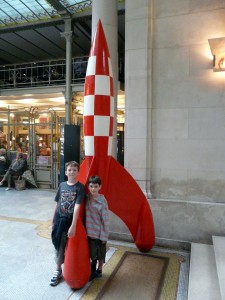 Belgian Comic Strip Center: Housed in a beautiful 1906 art nouveau building designed by Victor Horta, the Belgian Comic Strip Center was one of the highlights of our trip to Brussels.  We saw exhibits about familiar comic book characters like the Smurfs and Tintin and a host of others we had never seen before.  Some of the exhibits have tiny dioramas of scenes from the books which we spent a long time exploring.  They have several plaster replicas of well-known objects from Tintin books such as the rocket ship, King Ottokar’s scepter and automobiles.  The museum also has a large and very cool gift shop.  Unfortunately, they don’t stock a lot of English language comic books.  http://www.comicscenter.net/en/home

La Boutique Tintin:  For my kids, no trip is complete without a souvenir.  To that end, we headed to the biggest Tintin store in the World, La Boutique Tintin, which is located just off Brussels’ Grand Place.  You’ll find everything from t-shirts to tableware and from socks to clocks.  Make sure you bring plenty of pocket money.  This place isn’t cheap.  (Rue de la colline, 13, Brussels)

Hergé Museum– Many people don’t know that besides Tintin, Hergé also created other comics, illustrations, advertisements, and film posters, and even tried his hand at painting.  Noted for its modern architecture, the Hergé Museum offers an in-depth look at this complex writer and illustrator’s life.  The exhibits feature not just Tintin but a host of other characters created by Hergé, including Quick & Flupke, Jo, Zette and Jocko.  Due to the fragile nature of the artwork, artifacts and documents, the collection is replaced every four months so the museum remains fresh visit after visit.  This will be most interesting to kids who are at least ten years old.  Located thirty kilometers outside of Brussels, in Louvain-la-Neuve.  http://www.museeherge.com/ 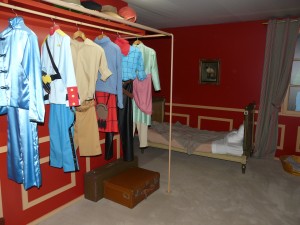 A replica of Tintin’s Moulisart bedroom at Cheverny.

Road Trip- Cheverny: No Tintin pilgrimage is complete without a road trip to Cheverny, the Loire Valley castle that inspired Captain Haddock’s beautiful inherited estate, Marlinspike.  You can, of course, explore the castle and its period furnishings, as well as the beautiful grounds.  But if you’re a Tintin fan, you’ll want to take time to visit the permanent Tintin exhibit, The Secrets of Marlinspike, with lifesize replicas of Tintin’s bedroom and other rooms in the castle, as well as scenes from various books and interactive stations.  The gift shop has a decent collection of Tintin memorabilia.  (450 km. between Brussels and Loire Valley) http://www.chateau-cheverny.fr/uk_tintin.php

As they did for my generation and generations before me, Tintin books have inspired Jacques and Julian to explore the world in search of adventure.  But after a trip to Belgium, it’s not hard to see why his creator, Hergé, preferred to stay close to home.

If you’re interested in Herge’s life and art, don’t miss the excellent documentary by Anders Oostergaard, “Tintin and I,” available on POV: http://www.pbs.org/pov/tintinandi/.