On our recent trip to Belgium, it became clear that people know how to live well there. The foodĀ is fantastic Ā – one of my favorite cookbooks is called Everbody Eats Well in Belgium, and it’s true – and their beer is divine. Need I mention the waffles? And chocolate?

So it should come as no surprise that Belgians know some things about happiness, and this carries over into the childrearing arena. But instead of focusing exclusively on the happiness of the child, there’s a focus on the happiness of everyone in the family. So when we would ask about family activities, say, at a museum, they would tell us about kids programs on Sunday mornings, where the kids could do some activity so that the parents could have brunch or see a concert. Yes, the kids are getting some culture and social play time, but the focus was on the benefit to the parents. When the parents are happy, everyone’s happy.

The idea of family-friendly activities in Belgium is very different from that in the U.S. In the U.S., the focus is so strong on the kids that parents seem to disappear from the equation. In Belgium, whenever we asked about activities for kids or families, and the answer would inevitably end with “… and there’s a lovely terrace/cafe/bar where the parents can have a drink while the children play.” It was refreshing to hear. In the U.S. it often feels like parents are forced to sit at the kids’ table just at the point when they should be feeling most like adults, when they become parents.

In Belgium, parents don’t have to pretend to enjoy a fried food bonanza in a primary-colored food emporiumĀ with costumed characters running around so that their children can be happy. No, parents can sit outdoors among other grownups and drink a cup of coffee, or a beer, even, while their children entertain themselves. No need to be exiled to fake-happy-land with the other miserable parents and out-of-control kids. And if the children can’t entertain themselves, then mom and dad can drop them off at one of the many family programs available on weekends — not so much for the children’s happiness as for the parents’.

Does this sound crazy? I can only tell you that the parents we met in Belgium seemed quite sane, and so did their kids. Happy parents, happy kids. 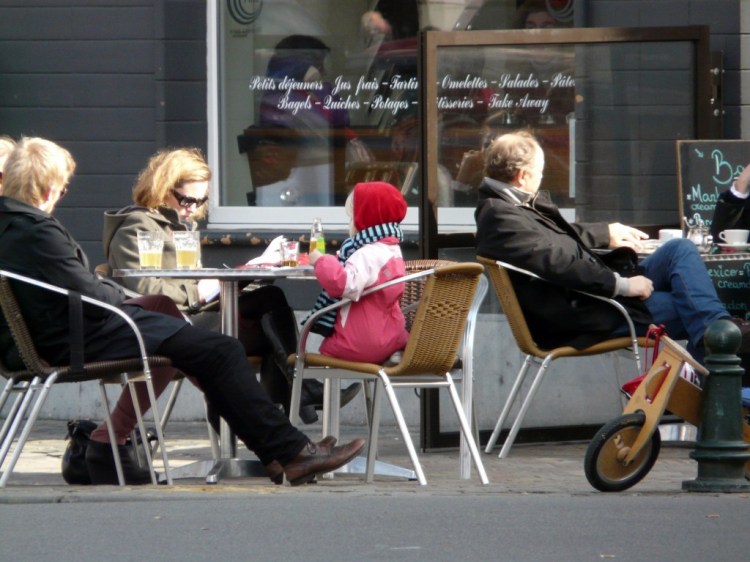