We met our guide Didier at the Belgian Comic Strip Museum on a cold, wet and dreary day, the kind of weather that defines March in this part of Europe. Heavy-set, with straggly shoulder-length hair, a ruddy complexion, and a penchant for Brussels’ native beer, gueuze, Didier looked like a cross between Jack Black and Comic Book Guy from the Simpsons. 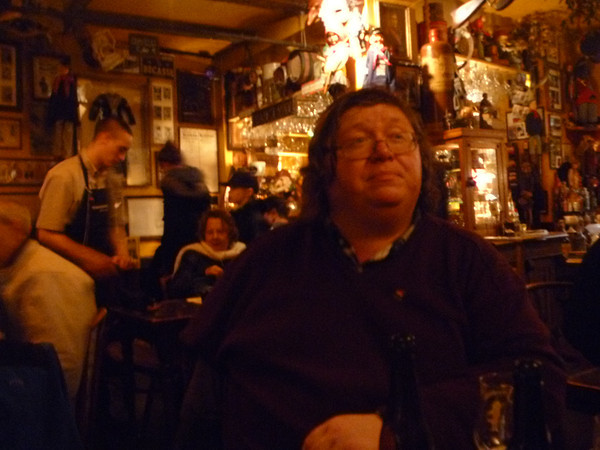 During our brief introductions, he told us that he had lovingly amassed a personal collection of almost 1,800 comic books and had a fit when his parents tried to make him get rid of some during a recent move. Clearly, the Gods of Central Casting were smiling on us that day.

Lesson One: The Beginnings

Belgium is a relatively young country, having finally gained its independence in the 19th century. So while over the centuries, other countries reached prominence in various disciplines such as philosophy for England, literature for France, and music for Germany, Belgian developed and refined comic books as their own art form in the twentieth century.

The first comic strip is generally acknowledged to be The Yellow Kid, which was printed in the U.S. in 1895 in Joseph Pulitzer’s “The New York World.” Comics emerged in Belgium in the late 1920s in youth magazines, most notably Hergé’s Petit Vingtieme, and as newspaper supplements. By the 1960s, the vast majority of comic books were either Belgian or American.

Belgium recovered from WWII much faster than France and England and with very little debt.  This meant they had a relatively big middle class with expendable income. Children were quickly seen as consumers of comic books and helped the art form flourish. Unlike so many art forms, authors and illustrators were able to make an actual living at it during their lifetime.

Three different schools of comics started to emerge: Brussels, Marcinal, and Antwerp. The Brussels School, which includes Tintin, is realistic, well-researched, and historically accurate. Not so with the Marcinal School, where everything is possible, including aliens, time travels, and even little blue creatures who live in mushrooms. The Antwerp School, which includes Suske en Wiske, is smaller and less well-known outside of Belgium. 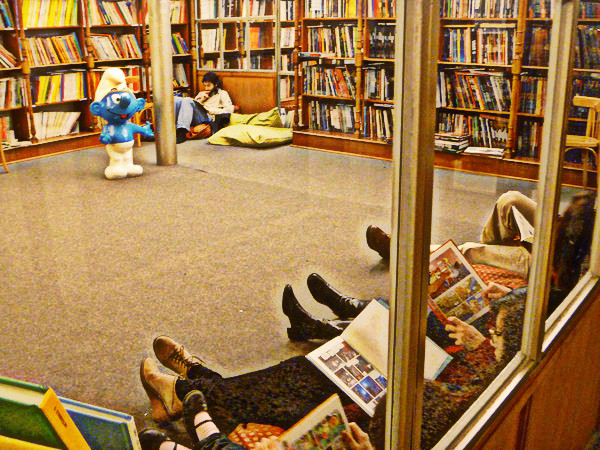 Soon, dozens of comic book characters gained a following. Ask any Belgian child aged eight to fifty and most have read and re-read the exploits of their favorite characters.

We’ve all heard of the Smurfs and Tintin but here are some lesser-known (at least outside of Belgium) but important characters in the Belgian comic book canon, according to Didier:

After our tour of the Comic Strip Center, we braved the elements to visit Didier’s dealer.  Clearly a regular in the dusty, overstuffed shop, Didier introduced us to the shopkeeper who complained about the fact that he was running out of room in his shop. Didier let out a long-suffering sigh and replied that he couldn’t even keep up with the new stuff and he much preferred the classics. We had the feeling they had this exact same conversation every time he came in.

As he recommended just the right classic comic books for us to bring back home, Didier couldn’t resist opening up each copy and turning to a specific page to point out some detail in style or storyline that we surely would have missed.  Loaded down with books and knowledge, we took our leave.

As I watched him amble down the rainy Brussels sidewalk, I couldn’t help but contemplate the parallels between comic books and rock and roll. Both young countries, Belgium and the U.S. have launched new art forms that were rejected by the establishment at first and are now widely recognized as art. Like rock and roll has for America, comic books have come to define Belgian popular culture. And both have their own brand of proud and passionate fan/scholars.

Thanks to Didier, we came away convinced that comic books were indeed an art form to be revered and studied. And that you can’t always judge a comic book by its cover. Didier is a new brand of gentleman scholar and his enthusiasm is contagious.

Want to know more about the ninth art? Read our other articles about Brussels and Belgian comic books, including Tintin, Hergé, and comic book figurines.