On our recent trip to Brussels, Paige and I ate (and ate, and ate, and ate!) our share of mussels, frites, waffles, and, of course, chocolate.  For most people, these foods typify Belgium’s world-famous cuisine.  But, as we dug deeper into the culinary scene, we discovered a number of other traditional, and innovative Belgian foods.  Some of these “discoveries” dug up long-lost memories for my tastebuds, since I was born and spent my early childhood in Belgium.  And some were entirely new to both of us. 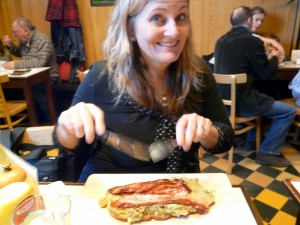 Stoemp and, if that’s not heavy enough for you, Stoemp sur planche

Stoemp is a Brussels winter favorite, made with potatoes and one or more vegetables (such as leeks, cabbage, carrots, or Brussels sprouts), roughly mashed with cream, bacon, shallots, and herbs.  It’s as warm and comforting as it sounds.

Stoemp sur planche kicks the heavy up a notch.  It consists of the same potato-vegetable mix served on a wooden board (or planche) on top of a large piece of bread.  This is then topped with either sizzling thick strips of bacon or meatloaf.  An old-school Brussels specialty, you’ll find this in fall and winter in cafés in the authentic neighborhood of the Marolles.  Paige enjoyed hers at the lively Clef d’Or early one Sunday afternoon after a long day of treasure-hunting at the Jeu de Balle market. 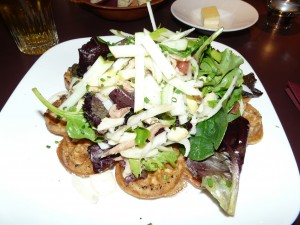 I’d had Liege waffles off street carts and Brussels waffles drizzled with Belgian chocolate sauce, topped with strawberries and fresh whipped cream in Belgian tea rooms.  I’d savored the smaller sugar waffles and sweet waffle cookies you can buy in virtually any grocery store in Belgium.  But, until this trip, I’d never tasted a waffle that wasn’t sweet. So I jumped at the chance when I spotted savory waffles on the lunch menu at the Galerie de la Reine’s Café du Vaudeville.

The revelation consisted of a thin, light waffle the size of my plate topped with lettuce, endives, granny smith apples, and delicate North Sea gray shrimp.  It was lightly dressed with citrusy vinaigrette and topped with freshly-ground pepper.  It’s a dish that will make you consider becoming a lunching lady.

Open 7 days a week (closes at 8pm on Sundays)

I have to confess that my Pavlovian palate starts to water at the mere mention of these divine nuggets.  They are the quintessential Belgian food: honest, flavorful, and filling.

You’ll find them on the appetizer menu of many restaurants in Belgium, from the most modest to the most elegant, and it is said that a restaurant can be judged by the quality of their croquettes.  I’ve been to a number of Belgian restaurants in the U.S. (these days you can’t swing a cat without hitting a Belgian restaurant in DC) and I have never once seen these on the menu.  This is because the crevettes grises, the tiny gray shrimp I used to fish for at the Belgian seaside as a child, are native to the North Sea.

Roughly the size of my ring finger, they are a mixture of gray shrimp and thick creamy, lemony sauce, breaded and deep fried.  They are served with a wedge of lemon and some parsley. 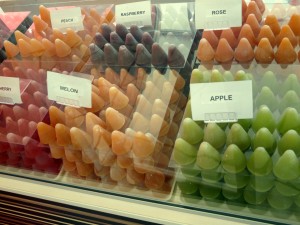 Now these, I remember from my childhood.  Cuberdons are a conical-shaped candy that is slightly hard and a bit crunchy on the outside, and soft and gooey on the inside.  The well-guarded recipe dates back to the 19th century, and today only a handful of candy makers produce cuberdons.

Traditionally (i.e., when I was a kid) raspberry-flavored, they now come in a number of different fruit flavors, from melon to black currant.  Their shelf-life is only three weeks, which explains why they are rarely seen on the export market. 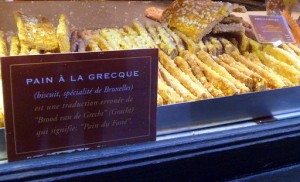 Pain a la grecque, or “Greek bread” is neither Greek nor bread.  Rather, it is an inch-thick rectangular loaf of bread sweetened with cinnamon and other spices and topped with pearl sugar.  The best of the best can be found right off the Grand Place at the venerable Dandoy bakery.

Dandoy has been in operation since 1829, and, unlike most bakeries which were subject to severe rations during WWII, it remained open throughout the war as it was allowed to produce biscottes, a dry cracker.  It is famous not only for its pain a la grecque, but for its speculoos and almond bread.

Dandoy: Rue au beurre, 31 (they have seven other shops in Brussels, including a tea room)

If you can’t make it to Brussels, here is a recipe for homemade pain a la grecque from Destination Dessert: